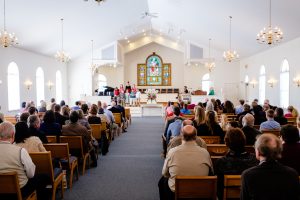 An organizational meeting for Trinity PCA was held at members’ George and Lucille Alder’s home on September 29, 1978, led by Ruling Elder Emeritus. Twelve people attended this first meeting. On December 3, 1978, the first church service was held at the Youth for Christ building in Harrisburg. This service was presided over by Teaching Elder Harry Miller preaching from the pulpit. Services were held there until purchase and settlement on a church building on July 16, 1979.

The building, formerly known as Evangel Temple, was located at 200 N. 34th Street, Harrisburg, PA. The first service was held there on July 22, 1979, with 13 members present. On October 11, 1979 an official petition was presented to the Mid-Atlantic Presbytery concerning the organization of Trinity PCA being recognized as a particular church within the Presbytery, and the church was organized on December 2, 1979. Reverend Harry Miller arrived as Pastor 1978 With Pastor Stuart Perrin arriving 1985. The church with membership of approximately 65 on February 17, 1991, held a groundbreaking service on the property located at 6098 Locust Lane, Harrisburg to begin construction of the present church building. First service in this building was held August 1991 with Teaching Elder/Pastor Steven Heinbaugh preaching from the pulpit.

Since the completion of the original building the membership had grown to 320 members. Ground breaking for an addition to the building took place on December 5, 1998 and was dedicated March 19, 2000. New facilities included a gym, fellowship hall, two kitchens, offices, classrooms, expanded lobby and increased seating in the sanctuary to approximately 300 persons.

In 2015 Trinity started a second worship site in Hershey under the leadership of Reverend David O. Kertland with the goal of becoming a separate congregation.  About 75 adults and children were commissioned at Trinity in Harrisburg to go and start Hershey Presbyterian Church.  In June 2020 Hershey Presbyterian became a particular church.